Lovely to Meet You

(Martha, right after Sacrament meeting starts, ostentatiously gets up from the middle of the pew behind Katie and moves right behind her. She begins whispering loudly)

Martha: I don't think I've met you before.
Me: I'm Katie.
Martha: I'm Martha.
Me: Nice to meet you.
Martha: Nice to meet you too.  So, are you married? Kids?
Me: No, it's just me.  (Looks around a little to see if people are being distracted by this conversation)
Martha: Just you? My word.  One of those career women, eh?
Me: (Um...excuse me?) Well, not really by choice...
Martha: Oh yes, of course, not by choice.  Let me write down your name and address.
Me: (Why could you possibly need my address?) Oh, okay. (Writes it down on the paper Martha provides. Martha goes back to her seat.)
Martha: (Gets back up, moves behind Katie again, all while the meeting is continuing).  You forgot to put your name. Is it Katie?
Me: Yes that's it. (Can this be over now?)

Gotta looooove the assumptions people make with older singles!  I'm starting to feel 'em! I'm sure there well be more scenes to this little one act. So stay tuned...

*Name has been changed to protect the blunderful
Posted by Katie Houston at 5:42 PM 2 comments:

I recently moved to a new ward. Being new in a ward is always a little scary, but I am amazed at how well Heavenly Father knows each one of us and how easy the transition was because of His watchful care.

My first week in the ward, I raised my hand in Sunday School to respond to a question.  I always worry about talking about my mission because I know it gets tiresome for people who didn't serve. The experience I was sharing, however, directly related to full-time missionary work and I prefaced the comment by saying I served a mission in Brazil.

After the Sunday School lesson was over, a couple came up to me who recently moved here from Sao Paulo.  They have only been here 4 months and don't speak very much English yet but are working hard to learn.  In fact, they chose to attend an English speaking ward instead of a Portuguese ward in order to learn faster with their two young children who are attending school in English.  I was very hesitant to speak in Portuguese to them because it has been 6 years this month since I got home from my mission.  I have lost a lot of vocabulary and grammar. But I remembered how I felt (and how difficult Portuguese was) after only 4 months in Brazil and knew that speaking to them in broken Portuguese might be meaningful in some way, even if only to relieve a little home sickness.  They were very forgiving and helped supply words I couldn't recall.

With the Brazilian connection discovered, we were instant friends.  Since that first Sunday, their whole family has taken me under their wing.  I sit with them in Sacrament meeting.  Their eight year old daughter, Sabrina, is learning to pray and bear testimony in English, so I write the English phrases and have her translate them in to Portuguese (even when I should be setting a good example and paying attention to the talks).  I cringe when I think of how poor my grammar is when I talk to them (sometimes the kids have trouble understanding me), but we are learning from each other.  I sat by four-year-old Ricardo last week and we traced his hand and practiced saying "hand" in English (all in whispers, but probably irreverent nonetheless!).

Embarrassingly enough, my brain is on overload from it all and I've been having trouble speaking in English. I've been stuttering all over the place and have accidentally used Portuguese words instead of English ones, which hasn't happened in a long time.  I love the challenge, though, and it connects me back to a time of my life that was so precious.

It makes all the difference to have even one friend.  I hope I remember that next time I think someone would rather be left alone on a Sunday!
Posted by Katie Houston at 3:58 PM No comments:

Email ThisBlogThis!Share to TwitterShare to FacebookShare to Pinterest
Labels: Friends

Dave's sister had her birthday on Sunday and we got together at his dad's house for a fun evening with family.  Her husband is an excellent cook and whipped up some homemade alfredo sauce that was so delicious. 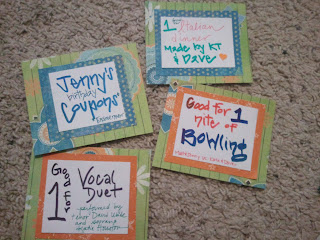 Dave and I gave her some coupons to use whenever she'd like.  Not shown is the coupon for unlimited games of Words with Friends with both Dave and me. 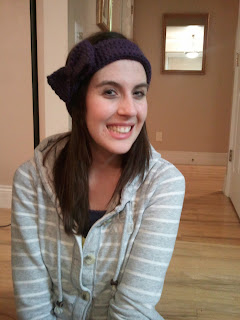 Jenny is wearing one of the cute ear warmers Tina makes. They were a HUGE hit with all the girls at school when I put them in a couple raffles so I gave one to Jenny. She said she had been wanting one! Thanks, T, for always helping me give the perfect gifts. 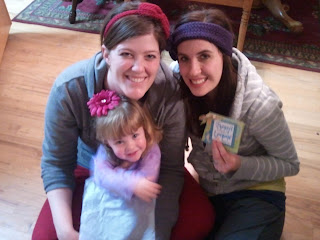 Here we are with Dave and Jenny's adorable niece Keyli (only 4 days older than Ella!). I happened to be wearing the crocheted headband Tina made me, too!

We spent some time watching home videos from when Dave and his siblings were little.  That was so fun. My heat melted while watching a Christmas video when Dave gave his mom and his dad each a hug after every present he opened. 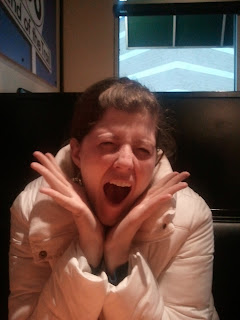 In other news, after lots of campaigning and hard work, my brother met his fundraising goal for his game, "Unwritten," which will be released in August! Our family is absolutely thrilled for him. I sent him the above picture to show him how I felt about it.  We are so proud of you for following your dreams, brother!
Posted by Katie Houston at 6:27 PM No comments:

After a long day of babysitting, I came outside and found my car cleared off of the several inches of snow that had fallen over the past 8 hours and this in my car windows (taken from inside the car). 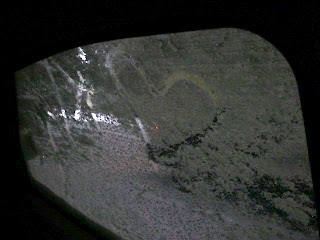 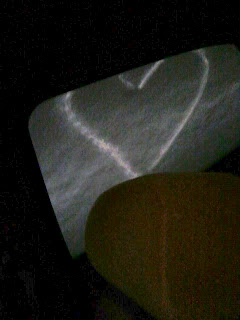 Email ThisBlogThis!Share to TwitterShare to FacebookShare to Pinterest
Labels: Dating

I knew I should have knocked on wood about me being past the hard stuff this year. I just knew it!

My 4:00 a.m. blog posting surely did come back to haunt me, just as I expected.  I woke up this morning at 7:45 a.m. exactly.  That happens to be the starting time of my first period class.  I called the office and told them to unlock my door and tell the kids I was coming. That part about me being on my way never got communicated. When I showed up at 8:02 (driving to work takes at least 10 minutes), 6 students had left, citing a non-existent rule about being allowed to leave if the teacher doesn't show up after fifteen minutes.

It's been a couple weeks since I've written.  It has been an absolute emotional roller coaster for many reasons.  The main one has been my job.  When I applied to the music education program for the first time at BYU, I mentioned in my interview that I am a sensitive soul and that it's really hard for me when people are upset with me. I remember them looking at me somberly and basically telling me that this profession would eat me alive.  But I persisted and here I am.

But you know what? I'm still breathing.  I think I have made it through one of the hardest periods of teaching yet for me.  I'm learning it's all about attitude.  The saying, "I think, therefore I am" comes to mind.  I take it for my own purposes to mean that whatsoever I think I am is who I become, although I don't think that's what it actually means.  The mind is so incredibly powerful.  We can sabotage our own lives by the way we view ourselves if we are not careful.  But on the flip side, think what we can do if we believe in ourselves!

I think I am going through an "I'm having a crisis about almost being 30" period of life right now.  To help alleviate the stress about this landmark birthday,  some of my former BYU roommates and I who will all be 30 this summer are meeting in Connecticut for a reunion.  We got on a conference call together to plan it and it made me realize just how much I have missed them.

It has been nearly 12 years since we all met, so of course our lives have gone in separate directions.  But there is nothing quite like talking to those friends who saw you through the transition into adulthood and many, many other pivotal decisions you've made since then.  These women, along with my family and other close friends, gave me their support through my decision about what career to choose when I was 18, whether or not to serve a mission when I was 21, a broken engagement at 24, my first years of teaching at 25, and so much more.  Sometimes when I am afraid I don't even know myself anymore (am I still funny sometimes? Am I kind? Am I helpful?), I take comfort in knowing that they know who I am. They can remind me if I forget.

Through all the ups and downs, the one thing that never changes is that I am a daughter of God.  He loves me and I love Him.  Though life goes forward and people move on, He is my most constant friend. It is that knowledge that helps me through even the stormiest nights.

Love,
Katie
Posted by Katie Houston at 3:33 AM 3 comments: